In the heart of a deserted office building, Nicolas Grospierre has recreated a dreamlike winter garden. For a few days, before the picturesque, glass and metal structure is destroyed, the artist has devised in its core an illusory and infinite space. The Glass Trap is an attempt at capturing the fleeting soul of a soc-modernist pyramid placed on its head.
The Glass Trap is a premiere for Nicolas Grospierre inasmuch as he has willingly put aside his primary medium, photography, to create a living picture. The extraordinary, illusory winter garden set inside an abandoned 1980’s office building that will shortly be destroyed is a typical site specific installation inspired by the venue, and imagined as an addendum to its history. The glass cube filled with plants is the only living element in a building destined for destruction. The installation is at the same time a kind of mental emergency exit, but also as an amazing kaleidoscope opening in front of the very eyes of the viewer an endless space full of vegetation, in the heart of a massive but absurd (because built upside down) pyramid.
Grospierre finds once again some potential in a meaningful but abandoned and forgotten place, in this way filling up the alternative topography of the city with yet another unsuspected and surprising situation. The meaning and great strength of the artist’s practice lies in his ability to get under the city’s skin and emphasising the idea that a significant aspect of the city is also the space hidden behind the enigmatic facades of the buildings. In this way, Grospierre expands the notion of public space, immersing in an urban game not only us, viewers, but also intimate office spaces, libraries, and administrations. 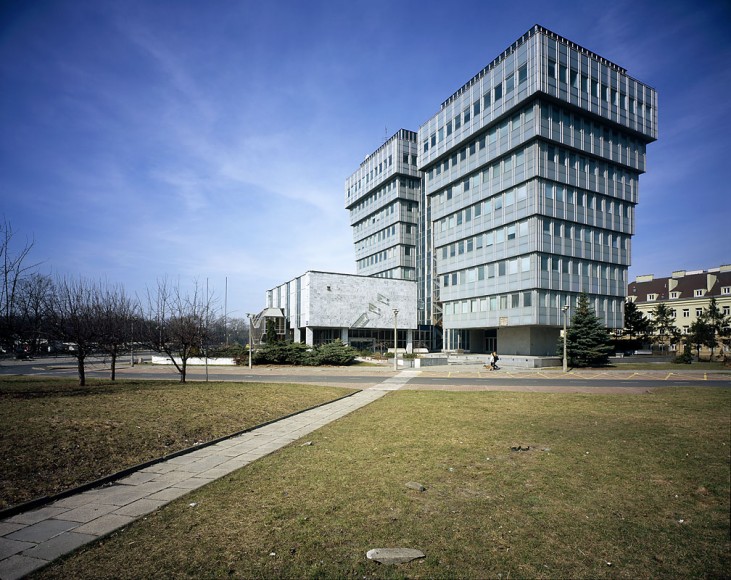 The Ciech building in Warsaw, prior to demolition, where the installation was created. April 2010.