The Self-Fulfilling Image aims to create a photograph that is both the result and the cause of its own existence, bringing to life this photograph through a performance. Conceptually, the project takes its cue from the idea of the “self-fulfilling prophecy”, which creates the conditions that makes it become true. At the same time, this photograph takes its inspiration from the “one image story” in the manner of the Renaissance tradition depicting different sequences of the lives of Biblical figuresasa visual narrative for a complete story. The Self-Fullfilling Image merges both propositions into single project: a large photograph placed into a specific venue and brought to life through a performance.The “hero” of the photograph is the artist, Nicolas Grospierre. The Self-Fullfilling Image appears at first glance like a simple urban landscape photograph, but is in fact ani ntellectual game and a commentary on his own situation as an artist in New York. The photograph depicts a wide-angle landscape of a street of Chelsea seen from a bird’s eye view. Chelsea as the heart of the NY art scene. In the first sequence, Nicolas Grospierre is seen walking in the street carrying a huge framed photograph. This photograph is the same one that the viewer is looking at, and which is currently being described. In a second sequence, further down the street, the artist is meeting with someone, a gallerist, to whom he is presenting the photograph. The third sequence represents the opening of Nicolas Grospierre’s exhibition in a gallery: the photograph hangs on a wall of the space, and Nicolas is in discussion with a person, possibly the gallerist. And, finally, in one of the windows of the street buildings, one can distinguish a reflection of a person taking a photograph from the other side of the street: it is the artist taking the picture.The performance is what is actually happening in the third sequence of the photograph, i.e. a real opening of a show, in a Chelsea gallery, with the actual photograph hanging on the wall of the gallery where it is seen hanging in the picture. The actors of the performance are the viewers that came to the opening: they are part of the picture which they are looking at. 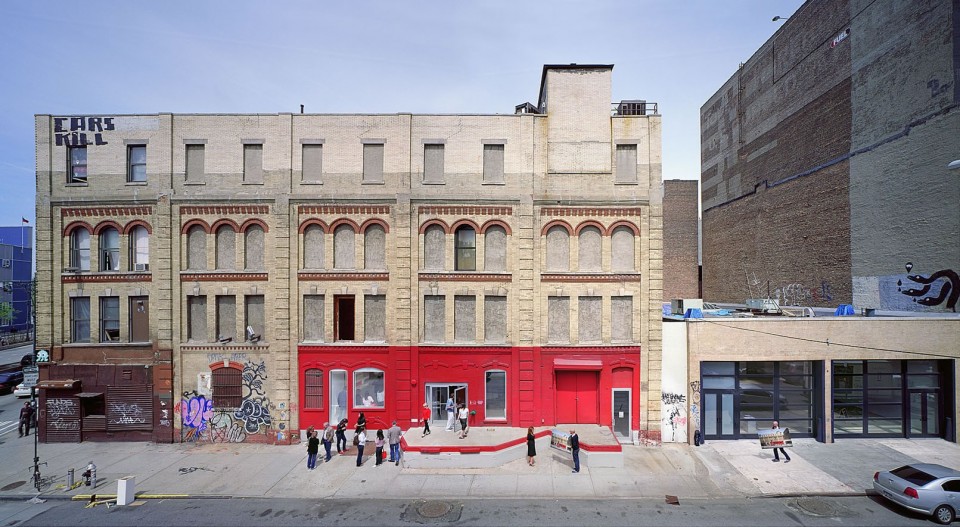